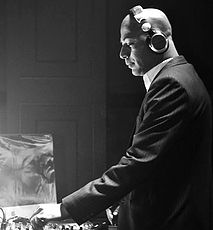 Growing up in an environment filled with funky soulful sounds, DJ Bernie started his vinyl collection at the tender age of 13. Spinning professionally since 1987, he made himself known as one of Kuala Lumpur’s DJs to be reckoned with.

On the side, due to his passion for ‘live’ jazz, funk and Latin bossa nova, DJ Bernie involved himself greatly with the Heineken Green Room Sessions, started since late 2001. DJ Bernie with his strong roots in funk, new wave, rock, soul and rhythm & blues, Latin jazz to break beats and hip-hop ensures an eclectic musical journey for all dance music lovers.

DJ Bernie’s last full-time residency was at The Hard Rock Cafe Bali. He currently does local and international gigs and also consults the entertainment for various clubs/bars/events and runs a DJ agency.